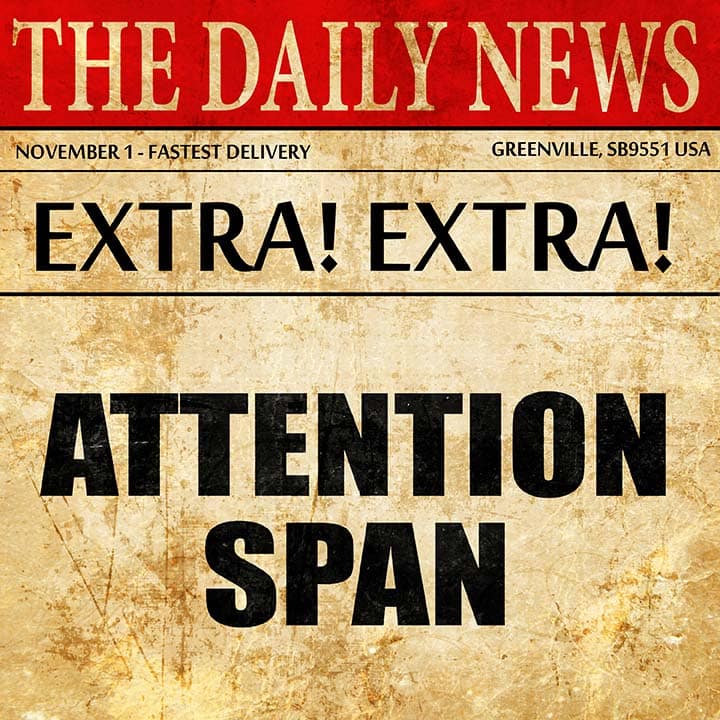 When training your Attention Span for the purpose of concentrating more effectively, the main obstacle you will encounter is the natural mental resistance that arises in response to the extended effort of holding your focus steady.  The resistance that causes you to lose 'target lock' turns out to be useful in teaching yourself how to overcome them.

Just as your arm would eventually become weary and unable to continue lifting a heavy weight held out in front of your body, your brain burns a major amount of energy when working to maintain a consistent Attention ’signal’ targeted onto a single task.  Let go of the weight (the target), and it falls away.  Thought, like any Attention target, has to be either involuntarily or voluntarily* invested with Attention or it will fall away like a dropped weight. Since internal distractions such as unwanted self-talk and daydreaming are thought based, the fundamental principle works to your advantage in that you can resolve them by pulling the plug on the Attention that powers them.

*Use Voluntary Attention to compose thought in order to form the right ones while voluntarily withholding Attention from unwanted thought content to dismantle the wrong ones (the kind of chaotic content typically formed during bouts of Involuntary Attention).

Like most people, your ability to keep Attention fixed on a targeted task may last from as little as a few seconds to a few minutes (varying from person to person), but rarely more than that before it is interrupted by any of four very familiar culprits.  These 'Four Horsemen of Mental Distraction' are a psychological wall that has to be overcome with repeated effort and practice in order to improve your Attention Span and overall skill at Attention Control.

Reaching the limit of your ability to hold your attention onto a single thing is like ‘hitting a wall’ where you can’t go any further and feel the need to rest your brain for a short time before trying again to concentrate.  Getting to that point is actually good for your progress because of the opportunity it affords to move past it.

The key to concentrating Attention effectively for extended periods is to practice overcoming mental resistance until it becomes an easy habit.  Do not become frustrated when you hit your mental wall, but use the fact that you’ve run into it to as an opportunity to gain mastery over all four horsemen.

In your practice efforts, keeping track of how long it takes you to do so can be valuable in measuring your progress over time.  The more you work at breaking through the wall, the easier it becomes.  The easier it becomes, the faster you can do it, and the more scenarios there are in which you can effectively execute the maneuver when faced with any of the four forms of distraction.

To help you become more familiar with the Four Horsemen of Distraction and practice overcoming mental resistance, try the simple, practical dynamic brain exercise that follows.

Because thought and impulse patterns are merely energetic signals being fired off by the brain’s neurons, they must dissipate if you do nothing about them.  When you decline to engage with, participate in, or react to any thought, you deprive it of cognitive resources necessary to fuel it and all of its psychological and physical effects.  Without your Attention, a thought and the mental state that accompanies it behaves like every thought and state that has ever come before it, losing substance, losing effect, and is swept from the stage of mind.

This 'Direct Method'*Attention training mental exercise improves your ability to control and use your Attention at will.  It reshapes connective structures in your brain for greater efficiency, power, endurance, and mental flexibility.  The result is a better Attention Span, improved mental concentration, and more consistent mental focus over an extended period of time in pursuit of your goals.

*Direct Method - involving no digital assistance (such as brain game software) or use of training props (such as a when impulsive people reaches for a Fidget Spinner to help calm themselves).

It does so by challenging your ability to ignore a thought or impulse when it arises in your mind or body while you’re supposed to be engaged in a task. Simultaneously, the singular internal effort that allows you to manage interior distraction has a similar effect on external distraction - the choice to let it go rather than follow the tempting allure of it.

REMEMBER: The 'fading' of any thought will happen if you simply maintain your Attention on the target of your choosing!

The only way to ignore (or, "let go of") a thought or impulse is to be cognitively alert to so that you perceive its rise (its formation on the stage of thought).  To do that, you’re going to practice the skill of being mentally alert to your thoughts and feelings while refusing to participate in their viscerally dramatic content.

In working with it over time, you create your own opportunities to  practice cognitive watchfulness, and you’ll demonstrate the intuitive patience to wait for any distracting thought or impulse (or combination of both) to simply fade away.

For this technique, you will need to use either a clock or watch with a revolving second hand, or an electronic timer with an alarm, and complete the exercise in a place where you can be alone, during a time you won’t be disturbed by anyone.  Also, have a piece of paper and pencil with you to note performance times and jot down notes about what you experience.

When you reach a point where fatigue sets in and you're not enjoying the activity, give yourself a a short bit of time to refresh, and begin again, exerting yourself a bit more as you approach your limit so that you can go just slightly past it, and then note how long it takes you.

Sit in a relaxed manner - a chair is fine, as long as it is not so comfortable you start dozing off.

Select a spot on the wall across from you to center your eyes on that is just SLIGHTLY ABOVE eye level (you want your eyes to be looking comfortably upward).  Your objective is to gaze at that spot while you breathe in and out in a relaxed fashion, and your only concern is to take that action, and hold your gaze.

Maintain your gaze while breathing slowly, deeply, in a relaxing way, and at no time are you to allow any distraction to stop you from your task - not an itch, not a desire to move around, and most certainly, NOT A THOUGHT OR EMOTION OR IMPULSE. You are to ignore (release your Attention from) anything that arises in your mind, and give every ounce of your attention to the spot on the wall.  Period.

When you suddenly realize that your attention has wandered, simply stop, write down how long you were able to hold steady before you lost cognitive control, then get back to the exercise to try again.

Do not judge yourself, do not criticize yourself, because that is a waste of time, and just another example of thoughts and impulses needing to be under your control.

As you do this direct-method Attention Span exercise over a period of weeks, you will start to see and feel dramatic improvements in your mental concentration, but all you really need is the small, gut-level, real experience during any one of the exercise sessions that will tell you without a single doubt that you have the personal power to control your Attention and command your own mind to obey your Will.