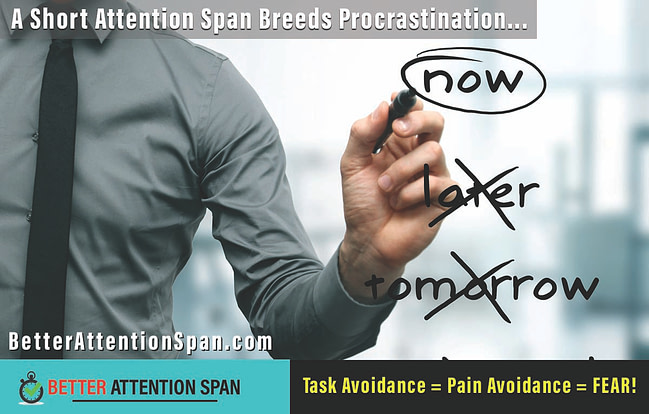 Improve Your Attention Span by Learning How To Face The Pain and FEAR That Sends Your Mind Running Away From a Task!

If you want a better Attention Span, one of the fundamental habits you must develop is an instant, rebellious reaction toward any temptation to avoid doing things you know you need to do.

Not just turning away from duties in a future sense (when you think about them), but any task in which you immerse yourself in the present moment but can't seem to stick to because you choose - yes, CHOOSE - to follow the lure of the distracting option.

Avoiding what you're supposed to do in the immediate now leads to a habit of avoiding future duties.  After all, if it seems unpleasant and worthy of neglect currently, what's to change the result in months or years ahead?  You've likely had that rationale occur to you - it happens to everyone.

A short attention span is procrastination in real-time - the letting go of a designated Attention target in favor of something else, a more pleasurable prospect.

Short Attention Span will cause you, in the moment you're doing a task, to turn away from thing you should be attending to.  There are predictable mental processes involved, however, and it tends to be similar for the average human being.  The solution is thus widely useful and practical for anyone.

To beat both a Short Attention Span and the Procrastination it breeds, you can practice detecting the urge, rejecting the urge, and redirecting to a chosen target task or activity.

By the 'law of displacement', this means simultaneously developing two new habits - the courageous and heroic habit of facing down the mental event and dismantling the thought-based causes of the pain you feel - the triggered negative experience that causes you to detach from your rightful target in the present or avoid it altogether in the future.

THAT PAIN YOU FEEL WHEN YOU'RE AVOIDING THE THING YOU NEED TO DO IN ORDER TO SUCCEED...IS FEAR.

Okay, so you thought about doing a thing, and the thought of it hurts you.

You might get caught up in a bout of anxiety, pressure feelings, throw some bodily tension into the mix - the thoughts themselves may be a rapid-fire jumble of things you don't want to deal with, well, whatever the recipe mix of the thought-based impression the experience is unpleasant - and it conveniently blames the thing you need to do as the cause of the pain that the thought itself is generating and using to slap you around.

Where does that pain occur? Not entirely in your mind - the content happens in your imagination but the reaction it kicks off spreads through your central nervous system into your body. Pain.  Buddhists say, "SUFFERING."

From a mere THOUGHT!  And it can happen so fast, often without you even realizing that your mind is running a con on you (all under the lie of keeping you from the imaginary harm it manufactures).

Yet, that microscopic special effects show is enough to stop most people in their tracks, turn them away from their destiny, and send them into lives of habitual, never-ending escape from better possibilities.

Any thought that gets away with the trick is a sly taskmaster holding power over your mind by virtue of its ability to convince you to suffer when it shows up, that your suffering is necessary, and that it's the smart way to stay safe - safe from possible boredom, safe from greater responsibility, safe from the horrors of making lots more money, and safe from the scary prospect of your own success.  Of course, the pictures such thoughts provide don't tell you the long-term consequences of listening to them.

If they showed you that, you'd never listen to them, and would rather get on with your duty and destiny.  Anyway, back to that useless thought...

Now, the thought itself is just a set of imaginary special effects - a synthetic experience, mimicry that feels like a three-dimensional, real-world experience.  Unfortunately for every human being on earth, the thought ALWAYS presents itself as a yummy, bright, must-open-or-else gift so you can turn the power of Attention to it.

With your Attention fully captured, the unmanaged impression pulls you in and convinces you that the theatrical performance is the real world.

The illusion, with its brutal promises, then lords over you until you relent and turn away from your duty, your promises to yourself, your goal, and your destiny, at least for the time being.

If you allow it, the thing then stands boldly on the stage of your mind, feeding you nightmares it says will come to pass should you 'dare' to do that thing you actually would love to enjoy doing (if only that thought weren't in the way).

Because the rich, emotion-laced mental event is typically strong in its effect, allowing it to happen often can result in a DELUSIONAL MEMORY that rises up every time in association in relation to the task type being avoided.  It creates a negative experience even of things that should have no negativity attached.  Procrastination in the moment can devolve into a bad attitude against the activity, regardless of how beneficial it is.

If unchecked, if unmonitored, if UNATTENDED, that little delusion will spread into an all-encompassing MENTAL STATE that miscolors every thought that comes after, as one-moment avoidance falls into another followed by another until you become lost to the goal. And the goal that follows. And the next.

THE WAY OUT IS IN - TO ESCAPE, DIVE IN, GO THROUGH AND COME OUT THE OTHER SIDE, STRONGER AND WISER.

Fortunately, you have a POWER OF YOUR OWN, and that is to come back to yourself and look that sorry, lying, crybaby of thought right in the eye and hold your gaze until it releases its grip, slides into the distance, and fades away.

Do this repeatedly and each illusory beast that follows will be smaller and weaker until, for long periods, they stop coming to bother you at all.

At that point, you've grown so skilled that you easily see them coming and, most of the time, that is enough to make them give up the fight, leave the stage immediately, or not bother to settle there in the first place.